The market for Executive Peer to Peer Networks is growing both in size and importance. As companies become more complex and face ever tougher economic challenges, leaders are looking beyond their business for problem solving strategies and new ideas. They are realising the benefit of learning from peers who have dealt with similar issues.

Presidents Institute was founded in 2005. Its founding principles were (and are) to enable CEOs, business owners and senior executives to develop both their businesses and themselves.

Paid membership to the Presidents Institute permits access to trusted peer groups, executive education and international summits across Belgium, Denmark, Finland, Germany, Netherlands, Norway, and Sweden. The organisation has expanded rapidly since its inception, aided by its strong values of People, Passion and Purpose.

The market for Executive Peer to Peer Networks is growing both in size and importance. As companies become more complex and face ever tougher economic challenges, leaders are looking beyond their business for problem solving strategies and new ideas. They are realising the benefit of learning from peers who have dealt with similar issues.

The rising competition was putting pressure on Presidents Institute’s price and value offer. By the fiscal year end of 2016 sales and retention rates were being affected. Despite a strong product, the number of membership non-renewals was rising and the outbound sales team were struggling to buck the trend.

With a limited best practice sales methodology to follow and consistent language to adopt, the team were losing the confidence to sell effectively. Targets were being missed and sales were becoming difficult to predict and stabilise. Sales staff turnover was becoming a problem with few making it beyond their first year.

How to sell in a post-crash economy

Historically, the sales teams had won business by adopting a high energy and assertive conversation style designed to close the deal in the first call. But in the years following the 2008 global recession business mindsets have changed. Executives are more cautious in their purchase decisions and more considered in their time investments.

To begin with a more pushy sales approach had worked well, but it was becoming evident to the Director for Sales Excellence that the customer experience needed to be improved. Senior executives and CxOs were an important target audience and they were not responding positively to this style of selling. A step change was needed.

The conversation with prospective and existing members had to focus less on product and closing and more on the value of membership. A personal, consultative and richer conversation that matched the CxO mindset was now required. It had to get to the heart of what the Institute stood for and the tangible and intangible benefits this gave to their business leader members. It was about establishing a connection between brand and customer that was closer and deeper than ever before.

SPIN® - the catalyst for change

The Sales Excellence Director in Presidents Institute was already familiar with SPIN®. Like many SPIN® devotees around the world, he had read the book by Huthwaite’s founder Professor Neil Rackham and appreciated the science-led behavioural research behind it. He knew it would be the catalyst for change they were looking for.

In 2016 Presidents Institute and Huthwaite came together to begin the sales leadership transformation. 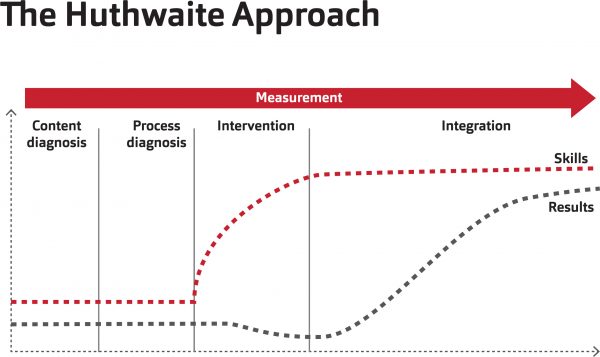 By segmenting each stage of the process, Huthwaite were able to plan a training intervention and behaviour change programme that was not only measurable but which aligned the execution of SPIN® to the client’s performance-first objectives as well as across their Danish, Swedish, Finish, German, Dutch and Belgium organisations.

The project began with a small targeted workshop to enable Presidents Institute to understand the basics of how to create, capture and convey value for their clients. This was followed up with an introduction to the SPIN® principles. The sales and management teams then worked together to redefine their performance standards so the Huthwaite team could align them to SPIN® best practices. These initial steps created important buy-in for the SPIN® learning journey that would follow.

In small incremental steps the project then progressed within the new member acquisition team. The sales management team were trained first, followed by their sales team. To help reinforce and embed the new skills and support permanent behaviour change Managers were trained in SPIN® Coaching including the Sales Excellence Director. Refreshers were also conducted quarterly.

Sales professionals appointed after the programme were then trained via Huthwaite’s SPIN® Open Courses in the UK, Denmark, Finland and Netherlands.

In the autumn of 2017 it was time for the Retention team. A customised version of SPIN® was created to improve the behaviours needed for better valued-based conversations with existing members. This was carried out including quarterly refreshers as before with coaching for Managers.

It’s early days and competition in the market is accelerating still, but the SPIN® behaviours supported by SPIN® Coaching have had a major impact on Presidents Institute’s ability to live their brand values of People, Passion and Purpose. Customer centricity has increased, conversations with members and prospects have improved and both factors have helped stabilise both employee and member losses significantly. SPIN® Coaching, in particular, has supported a culture growth of performance improvement generally and this is having a moral boosting impact all round.

Advice for other business

The Presidents Institute case is a clear example of the importance of coaching in a behaviour change programme. Change is not easy and not all sellers were receptive to doing things differently in the early stages but with continued support and reinforcement from sales managers the perseverance is paying off.

Certainly, Huthwaite’s own research has shown that 20-40% growth rates can be achieved in sales when coaching is done effectively.