‘Huthwaite Collaborative’ - A step change in helping sales leaders to upskill their teams, without the hurdles of traditional training. 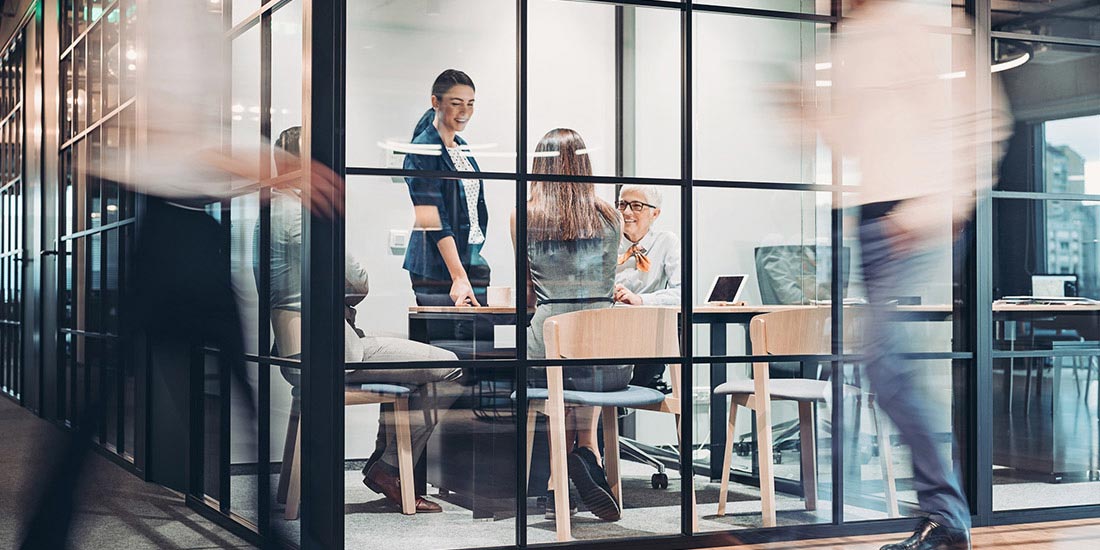 Faster skills improvement, less time off the job, transparency, measurability and value from the offset – just some of the benefits Huthwaite International’s new collaborative learning model is promising to deliver. Huthwaite’s Robin Hoyle takes us behind the scenes and explains why it’s more than just a promise.Many think that collaborative learning has had its day; failing, as it has, to achieve anything like the anticipated sustainable behaviour changes many business leaders had hoped.

Throughout its rise and fall Huthwaite’s learning innovation experts have stayed firmly on the sidelines, watching with interest. Validation is key for any new delivery method entering the Huthwaite portfolio and for them collaborative never quite cut the mustard. Until now.

After a year of development, 18 months of successful live trials, and an international award already under its belt, Huthwaite Collaborative is here. Fresh and new but building on the rigour of Huthwaite’s core approach, it’s giving those sales organisations with a genuine learning culture, a faster, more measurable, more sustainable route to achieving high performing sales and negotiating teams.

Where did collaborative come from, why did it fail?

It’s an eternal problem. How do sales leaders upskill their teams, while continuing to meet targets and minimise downtime? Add on ever increasing workloads and operational pressures and it’s no surprise when leaders and their teams admitted they simply couldn’t spare the time ‘off the job’ for training.

Enter a new type of collaborative learning model. One that incorporated a learning technology that would enable communication and shared working with no downtime. It was welcomed with a fanfare of enthusiasm from L&D and sales leaders alike. But the adulation was short lived. Data later suggested collaborative learning was not the panacea many hoped it would be. Rather than an uplift in the value delivered there had actually been a fall.

Robin and his Huthwaite colleagues believe there are a number of reasons for the demise of traditionally managed collaborative programmes:

1. The technology had been oversold. Its introduction was based on the idea that somehow collaborative would do things for the organisation rather than enable the organisation to do things for itself. Perhaps, a naïve belief in the power of automation means that businesses think that once they have bought a technology platform, they need to do less than before when it comes to learning and development.

2. The technology was badly designed. Digital learning resources can be expensive to create - especially if their creation is outsourced. Once made, they are rolled out as extensively as possible, regardless of whether they are fit for purpose or even relevant to the individuals required to use them. They also have a shelf life, a period beyond which they feel out of date and may have been overtaken by more recent developments.

3. The purpose of the collaboration – and what it delivers – isn't clearly articulated. If we use LinkedIn, Twitter, Facebook or Instagram, we have a reason for using each platform. They provide different connections, in a different context for different parts of our life. However, in learning, the purpose of this connection is not always clear, and how this all contributes value to the business is often consigned to the ‘too-difficult’ box.

What needed to change for collaborative learning to work?

Despite these common challenges, Robin and the team weren’t ready to give up on the collaborative idea. They believed it had merit but that its success would depend on certain stipulations, that had previously been absent.

Robin explains. “To be an effective learning delivery mechanism collaborative must be delivered in conjunction with a strategic and robust selling skills methodology. That means having expert coaches throughout the process coupled with an understanding that not every sales culture lends itself to a collaborative intervention. One does not fit all.”

The Huthwaite team were convinced they could deliver a collaborative learning environment addressing these prior shortcomings, with a clear purpose, a clear role for sales managers and which would transparently demonstrate the value of the learning intervention – both to those involved and the wider enterprise. In short, they set about proving that rather than being written off collaborative learning had a big future.

How can Huthwaite Collaborative succeed, when others’ attempts have failed?

Robin shares what his team believe are the six fundamental and integrated components to a successful collaborative model.

1. Have one role for sales managers and a different role for team members. Most collaborative or social learning – however facilitated by technology – is based on individuals working together to solve problems. The Huthwaite model doesn’t lend itself to a group trying to work out what the answers are. Instead, it’s a collaborative environment which has one role for sales managers and senior people and a different role for sellers. Sales managers and senior people play an important part in in supporting learners and in creating the environment in which it’s OK to be a learner.

2. Go beyond coaching. Many sales organisations profess to have a coaching culture. But Huthwaite know, from their own experience, this isn’t always the case. Huthwaite wanted to create a new route for managers to support their team members. One that would combine coach, facilitator, mentor and assessor. They called this role ‘The Enabler’. There is a vast difference between being an exceptional seller and an average one, the Enabler must be able to judge what excellent looks like, what the building blocks of sales success are and be able to give supportive and constructive feedback.

3. Create a genuine Learning Journey. Since the phrase ‘Blended Learning’ became a little hackneyed and started to fall out of favour, many organisations have created a so-called learning journey. Huthwaite's approach, however, was to build a genuine learning journey – detailing what happens in detail at each stage and spending more than twice as much travelling time after the classroom component than before it. This is where the rubber hits the road and it’s where the biggest barriers to the success of the sales learning intervention will be.

4. Don’t forget the classroom. Huthwaite equips people with high performance behaviours which are used by skilled and successful sellers. However, the classroom remains important in helping participants practice those skills in a safe space and gain encouragement and expert feedback. This experiential element is important. The team know how difficult it is to get people away from the day job. Time is tight and to make the most of that time commitment means doing things in the classroom that simply can’t be done elsewhere. With the input of their Enablers, participants are ready to benefit from the intensive classroom experience before they walk through the door, not have them sat being told things that could have been included in an e-learning module.

5. Reinforce, Implement, Embed. Unlike most programmes, in which the classroom is seen as an end point, in the true collaborative experience this is where the work really starts. It is here that the Enablers come into their own, supporting action plans, holding their charges to account for implementing their nascent skillset. Mostly though it is facilitated reflection which delivers the high-performance behaviour change. Enabler and participant will agree targets, as they are completed they are checked off. Each target should be clearly linked to an existing Key Performance Indicator (KPI) and each task will have a noticeable, positive impact on one of those KPIs.

6. Properly measuring success. As mentioned earlier, a key challenge for any sales leader is in demonstrating the value of any learning investment. Because Huthwaite Collaborative ties the transition from skills to behaviours - so specifically to real live selling - each task generates evidence of impact. The Enablers are invested in the performance of their people. The participants are engaged in a collective endeavour. Each individual aspires to be successful. Because the behaviours which we have introduced, explained, trained, coached and enabled are based on what successful sellers do, Huthwaite Collaborative gives them the best chance of achieving high performance through behaviour change.

How to know if this new collaborative model is right for your team?

Explains Robin: “Huthwaite Collaborative is a new evolution but it’s not a pancea. For this new evolution in collaborative learning to be effective, it has to be implemented within the right sales organisation, possessing a culture and ethos that fits with the open, supportive and collaborative ethos of the training methodology itself.”

How do you know if your sales organisation has the right foundations in place? “It’s not so hard,” Robin continues. “There are some quite simple questions to ask.” He splits them into three main areas; attitudes towards technology, team dynamics and culture, and finally, attitudes towards skills and developments.

Attitudes to skills and development:

The combination of collaborative learning, teamed with a world class sales methodology and an expert coach represent a genuine step change in collaborative learning. Commercially focused, it is a learning delivery model that enables a faster improvement in skills over a larger population. And it is this integrated approach that offers sales leaders the chance to upskill their teams, while overcoming the key hurdles associated with delivering new methodologies. Providing, of course, they are ready for it.

What are we now?

Trials over, Huthwaite Collaborative is already proving its worth. Learners are more engaged and motivated, new selling skills are put to practice ‘on the job’ immediately and the value of classroom (or so called ‘downtime’) is massively enhanced. In June 2018 Huthwaite and one of our early Collaborative clients ITN Productions won ‘Sales Programme of the Year’ at the highly coveted international Promote awards in Stockholm.

It’s not for everyone but with the right components in the right environment, professionals sceptical about collaborative might just want to think again.